Notice: Trying to get property 'name' of non-object in /home/inst1tut3/public_html/components/com_k2/views/item/view.html.php on line 643

Notice: Trying to get property 'link' of non-object in /home/inst1tut3/public_html/components/com_k2/views/item/view.html.php on line 644 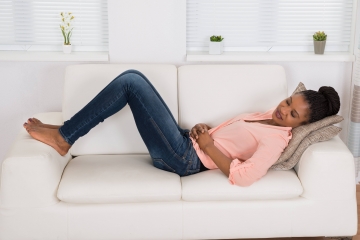 What is irritable bowel syndrome?

Irritable Bowel Syndrome (IBS) is a common condition for which patients seek healthcare and the most common reason for a visit to a gastroenterologist. It affects at least 1 in 10 people and is considered the most common of the functional gastrointestinal disorders (FGIDs). The primary symptom is abdominal pain -- usually in the large intestine or stomach -- along with either constipation or diarrhea or both. The pain can be intense and constant, but often it fluctuates. Food moving through the intestines too quickly may result in diarrhea; too slowly, constipation. The gut may thus lose its normal rhythmicity.

Common symptoms that accompany IBS pain and bowel changes include cramping, heartburn, gas and bloating, burping, globus (i.e., sense of a lump in the throat), and more rarely, cyclical vomiting.

IBS is a poorly named condition as many people who suffer with IBS find it more than “irritable.” It is considered a functional condition because its symptoms are not explained by structural or biochemical abnormalities or by organic pathologies, but rather are the result of a dysfunction of the enteric (gastrointestinal) and central (brain and spinal cord) nervous systems. This means that IBS is neither dangerous nor fatal, though it is often disruptive to one’s daily pursuits.1

How is irritable bowel syndrome diagnosed?

IBS is diagnosed according to the Rome III criteria: Abdominal discomfort or pain associated with 2 or more of the following (present at least 25% of the time).

The symptoms must occur at least 3 days per month for 3 months (for children, at least once per week for at least 2 months)

For the Rome III criteria for other FGIDs, see: http://www.romecriteria.org/assets/pdf/19_RomeIII_apA_885-898.pdf

Inflammatory Bowel Disease (i.e., Crohn’s and ulcerative colitis) and celiac sprue are the main diagnoses to be ruled out and can be done so with blood tests. The diagnosis of IBS is rarely found to be wrong later, yet the fear that it might be something worse commonly persists. This fear frequently adds to a cycle of anxiety, heightened pain response by the brain-gut, and gut dysregulation.

Understanding IBS is challenging because of its complex psychophysiology. Similar to other functional disorders, IBS does not have a single clear-cut cause. Rather, it is likely an interaction of many factors related to the central and enteric nervous systems. Although there is no organic disease process occurring, IBS does have some physiological markers such as reduced accommodation of food in the digestive tract as well as visceral sensitivity (reduced pain threshold of the organs).2 Other physiological dysfunctions include neurochemical changes such as serotonin, low-grade chronic inflammation, permeability, centralized pain, and disrupted gut flora.

The brain and digestive systems are better thought of as a unit called the brain-gut axis that continually interacts. The brain is constantly monitoring what is happening in the gut, interpreting the accommodation of food as it moves through the stomach and intestines. This process, along with many other factors, tells the brain’s pain centers to either dial pain perception up or calm it down.3

There is no single model to understand IBS, but the biopsychosocial model is the best fit so far and has led to effective management of IBS symptoms. The onset of symptoms can be triggered by illness, infection, a stressful period of life or combination of the above. Anxiety frequently precedes the onset of IBS and can leave a person vulnerable to worsening symptoms.3, 4

Scientific research for genetic associations to IBS is ongoing; however, as with many disorders, human genes only set the stage for potential problems to be expressed and do not directly indicate that a person will develop a particular disorder. With that said, there is a tendency of IBS to run in families. While this tendency may be due partly to a genetic predisposition, it is more strongly associated to social learning, such as how a family system copes with stress and emotions.5

How do stress and other lifestyle factors affect IBS?

Psychological factors can influence the central and enteric nervous system interaction. Many people with IBS experience elevated anxiety, relationship problems, increased daily life hassles, loss, change, or trauma preceding their symptoms causing the brain-gut to dysregulate over time.6 The development of IBS may persist with increased worry, hostile feelings, sadness, interpersonal sensitivity, unhealthy habits, and sleep disturbances.7 Allostasis is a term used to describe a person’s adaptability, or the ability to adjust to the demands of life.8 Put another way, allostasis is our ability to achieve stability through change. Treatments that can target personal strengths to build resilience may ease the gut’s reaction to stress.

Behavior of family members may also influence the progression of IBS. Dismissiveness or lack of support is frustrating and sometimes devastating for people with IBS who feel they are not being taken seriously. Magnetic resonance imaging (fMRI) show that the brain’s pain centers increase firing when someone has a strong emotional reaction or catastrophizes about symptoms.6 Validation that symptoms are real and reassurance that the symptoms are benign in nature are both important.

Are scans needed to diagnose or treat irritable bowel syndrome?

New neuroimaging techniques using fMRI and positron emission tomography (PET) scanning provide insight into the interaction of the brain’s pain centers and the gut.2 While enhanced technology has been good for research, it has not improved diagnostic ability for IBS. Further testing beyond the common differential diagnoses for IBS often leads to unrelated findings and too often results in unnecessary and invasive procedures. Unnecessary surgeries can complicate abdominal pain and delay more effective treatments. There are also risks with repeated radiation exposure of some scans as well as financial costs. Resources are often misspent on diagnosis rather than treatment, without benefitting the patient.

How is irritable bowel syndrome treated?

As with other functional pain conditions, medications are only mildly or temporarily helpful and can cause unwanted effects. The most common types of medications used to manage symptoms are antispasmodics, anti-diarrheal, and tricyclic antidepressants. New medications are being tested in clinical drug trials all the time, but the side-effects are often the same as IBS itself.4

It is natural to assume that a digestive problem must be related to food, but with IBS it is more complicated. While some people may have clearly identified one or two troublesome foods to avoid, most people have difficulty finding foods that consistently bother them. Some days, it seems, a certain food is troublesome, whereas other days it is not troublesome. The reason is that food does not cause IBS. Rather, the nature of IBS as a nervous system condition leads the gut to react to food with a stronger than normal response. These stronger than normal responses may come and go not from foods, but from what’s bothering the nervous system, such as stress or other lifestyle factors. These latter factors fluctuate, of course, making it seem as if a certain food is troublesome one week, but not the next.

Although food is not the cause, changes to what and how we eat can impact the symptoms and certainly impact overall health and well-being. How we eat is just as important as what we eat. The gut does not optimally digest food under time pressure, anticipation of pain, or any other stress. Common IBS eating patterns include avoiding food for most of the day until very hungry, then overeating the wrong foods without chewing well, and subsequently perpetuating symptoms. Some patients keep a long list of possible food triggers and try to avoid them all, often leading to increased anxiety and sensitivities. Generally, when the list of foods to avoid becomes lengthy, it is the gut that is the problem, not the food.

Performing large randomized trials of nutritional intake are a challenge, as is keeping up with ever-changing food fads. However, below is a list that is currently accepted as helpful for managing IBS:

There may not be a one-size-fits-all diet for controlling symptoms, especially if the underlying psychosocial issues are not addressed. The best results with those who change from skipping meals and consuming highly processed food to eating regular, small meals of whole foods, eaten in a relaxed environment with no pressure to eat everything on one’s plate.

Exercise has been found to be a good treatment for IBS management.12 However, intensely competitive sports with high performance pressure can exacerbate symptoms. Avoidance of activities is common with pain, but contraindicated. Reducing activities does not help pain, but is likely to increase it. Exercise supplemented with regular relaxation may help the gut regain the rhythmic contraction and relaxation that moves food through at just the right speed.

Cognitive behavioral therapies (CBT) utilize the biopsychosocial model of care and have been repeatedly shown to be better than other treatments for IBS.9, 13, 14 CBT teaches adaptive coping skills, supports lifestyle changes, addresses interpretations and beliefs, and retrains the brain to reduce the pain response. It is the most indicated treatment for IBS, but is not routinely recommended. Access to psychological services may be a challenge in part due to the persisting biomedical model of care despite the success of more comprehensive biopsychosocial interventions.

Cost is frequently quoted as a barrier; however, CBT interventions often cost less than other treatments and are more effective. Early diagnosis, education, and intervention with proper treatments could reduce costs long-term and provide more relief for patients.4

Biopsychosocial interventions often include multiple disciplines (psychologist, dietician, gastroenterologist, physical therapist) to target self-management skills that include multiple modalities, lifestyle changes such as eating habits and exercise, but especially a change in thinking styles and emotional coping responses. Within this model, there is evidence supporting treatments such as biofeedback,12, 15 mindfulness, yoga, and hypnosis. A warm connection between health care provider and patient consistently shows better health outcomes for patients (and probably providers too). The best treatment for IBS is likely to be a multi-pronged approach that integrates eating environment and dietary changes, sleep routine, regular intentional relaxation, non-competitive exercise, coping skills for anxiety, and supportive relationships that improve brain-gut axis response.

Jessica Del Pozo, PhD, is the founder of PACE, a four-week chronic pain management program (www.paceforpain.org) and co-author of The Gut Solution, a book for families with IBS utilizing SEEDS (Stress, Education, Exercise, Diet and Sleep), a biopsychosocial approach to IBS and RAP (www.thegutsolution.com). For the past seven years, she has worked for a year-long multi-disciplinary pain management program at Kaiser Permanente and helped many patients refocus their strengths to manage pain without opioids.