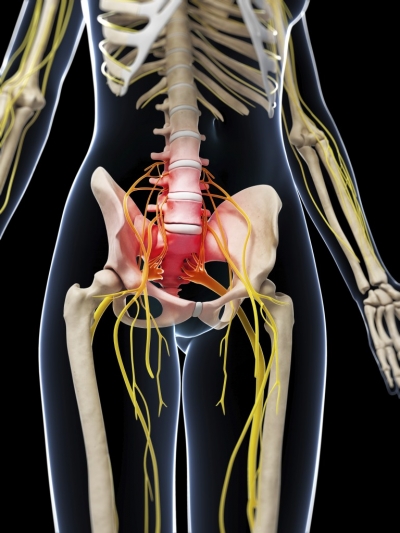 A central tenet of chronic pain rehabilitation is that what initially caused your pain is often not now the only thing that's maintaining your pain on a chronic course. Let’s unpack this important statement. It’s no accident that healthcare providers commonly refer to chronic pain syndromes as complex chronic pain or complicated chronic pain.

Central sensitization is a condition of the nervous system in which the nervous system becomes stuck in a heightened state of reactivity so that the threshold for stimuli to cause pain becomes lowered. As a result, light amounts of stimuli to the nerves, which typically aren’t painful, become painful. In normal circumstances, it takes a high level of stimuli – like a slug in the arm – to cause pain, but in chronic pain states any little thing might be enough to cause pain. Simple movements hurt, even such movements as sitting down or getting up from a chair or walking. The amount of stimuli to, say, the low back that is associated with these movements shouldn’t be painful, but they are because the nerves in the low back have become increasingly sensitive -- so sensitive, in fact, that any amount of stimuli to them is enough to cause pain.

This condition of central sensitization explains why not only simple movements can hurt, but also why light amounts of tactile pressure can hurt. Patients with chronic pain often have had a healthcare provider ask them, “Does this hurt?” when lightly touching or pressing the painful area of their body during an examination. This light amount of pressure is often enough to send the patient through the roof. In other circumstances, you might notice that a hug or massage, which typically should feel good, is enough to cause pain. It’s all because the nerves in the painful area of the body have become so reactive that any little thing sets them off.

Other forms of stimuli, beyond that which is associated with movement and touch, can also become painful once the transition from acute pain to chronic pain occurs. As most anyone with chronic pain knows, stress can cause pain too. The stress of a bad night’s sleep or the stress of work or family problems shouldn’t typically cause pain, but it does once the nerves become stuck in the highly reactive state of central sensitization. It may also be why changes in weather can cause pain. Emotional stress or changes in temperature or barometric pressure shouldn’t typically be enough stimuli to cause pain but they do once pain occurs as a result of central sensitization.

Sensitive nerves are normal in acute injuries or illnesses

The sensitivity of the nervous system is normal in acute pain. Say, for example, you step on a nail. We often think that the resulting tissue damage from the injury (in this case the puncture wound from the nail) is the only thing that matters when it comes to pain. However, even in cases where there is demonstrable tissue damage, we also need a nervous system to have pain. Without nerves and a brain, we would never be able to feel the tissue damage associated with an injury.

In our example, the nerves in the foot detect the tissue damage and send messages along a highway of nerves from the foot, up the leg and to the spinal cord. From the spinal cord, the messages travel up to the brain, where the messages are processed by different parts of the brain. The result of this processing is the production of pain. In other words, the brain produces pain in the foot. The brain and spinal cord (i.e., the central nervous system) produces pain in response from messages sent from nerves in the foot (i.e., the peripheral nervous system).

In this process, the brain and the rest of the nervous system team up with the endocrine (hormonal) system and the immune system. With the help of hormones and neurotransmitters, the brain tells the immune system to flood the area around the injury with inflammation. Inflammation is white blood cells and certain chemicals that assist in fighting infection and repair of the tissue damage. While engaged in these activities, inflammation also makes the nerves in the area around the injury super sensitive, which, again, is why the area of the body around an injury becomes so painful to touch or pressure. In most cases, the injury heals and the brain tells the immune system that inflammation is no longer needed and so the inflammation subsides. As a result, the pain of the injury also subsides upon healing because without the inflammation the nerves return to their normal level of sensitivity. So, they stop sending messages to the brain when normal levels of stimuli to the foot occur, such as when walking on the foot.

However, sometimes, the nervous system remains stuck in a vicious cycle once the tissue damage associated with the acute injury heals. The brain, in a sense, continues to call for inflammation even after the tissue damage is repaired. With the continued presence of inflammation, the nerves in the area of the initial injury remain sensitive so that any stimuli to them, even if they wouldn’t typically be painful, continue to produce pain. The continued pain thereby keeps the brain calling for more inflammation, thus eliciting continued sensitivity of the nerves to normal stimuli and subsequently more pain.

When this process continues past the point of healing of the initial injury, it’s called central sensitization, as we’ve discussed.

Once central sensitization occurs, any number of things can reinforce it. Just think of all the stressful problems that occur or can occur as a result of having chronic pain. Loss of work and subsequent disability can cause loss of income and significant financial hardship. The loss of work is often a blow to one’s sense of self-worth and self esteem. Chronic boredom or social isolation can also set in. Pain often produces insomnia, which further wears on the nerves. Because pain is also emotionally alarming, people with chronic pain also commonly become fear-avoidant of different activities that are associated with pain. Such distress lends itself to becoming persistently focused on pain so that life becomes predominated by pain and its associated difficulties. Anxiety and depression can secondarily occur.

Notice, though, that the initial injury or illness associated with the onset of pain isn’t getting worse. It may not even be a factor at all anymore, for as we’ve discussed, most injuries and illnesses heal (e.g., lumbar strains). Sometimes, of course, the initial condition associated with onset of pain continues (e.g., rheumatoid arthritis). However, in either case, the nervous system is now also playing a role in the cause of pain. The nervous system is now maintaining pain on a chronic course. Any number of stressful problems that occur as a result of the pain can then play a further exacerbating role in the long-term maintenance of chronic pain.

So, a central tenet of chronic pain rehabilitation is that, commonly, what initially caused your pain is not now the only thing that is maintaining your pain on a chronic course.

What to do about chronic pain?

The public and even some healthcare providers commonly don’t take into account the role that the nervous system plays in maintaining chronic pain. Instead, the focus of care tends to remain on looking for evidence of any lingering tissue damage or disease associated with the initial injury or illness, respectively. The presumption is that pain must be caused by either tissue damage or disease and so the initial condition that started the pain must remain unhealed. The possibility never gets considered that the nervous system has changed so that the threshold for stimuli to cause pain has lowered.

The key components of interdisciplinary chronic pain rehabilitation are the following:

All of these therapies are pursued in a coordinated fashion on a daily basis over a number of weeks. Patients learn them and become adept at independently pursuing them. As a result, patients continue to engage in them on an independent basis over the lifetime.